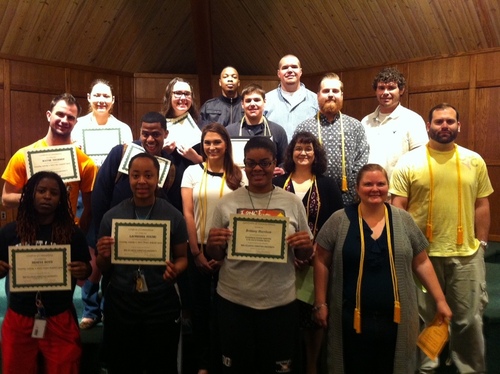 The Mid-Atlantic Christian University Zondervan Biblical Languages Award is given to honor the student who completes two years of Greek or two years of Hebrew with the highest GPA over 4 semesters. The winner’s name is posted on the Zondervan website and receives a coupon for a free book from Zondervan.  Dr. Lee Fields, head of the Biblical Studies Department, presented the Zondervan Hebrew Award to Joshua Scott Bondy

The MACU-Zondervan Theology Award is given to the student deemed by the faculty of the Department of Biblical Studies to have best demonstrated excellence in theological studies. Kyle David Layfield received the Theology Award.

Two students, Taylor Pierce and Brandon Davis, were awarded the Exemplifying Christian Leadership in the Dorm Award in recognition of their service to fellow dormitory residents.

The Youth and Family Ministry Award was given to Ethan G. Coltrain for demonstrating above average skills in ministering to youth.

The University received the 2013 President’s Higher Education Community Service Honor Roll, which highlights the role colleges and universities play in solving community problems and placing more students on a lifelong path of civic engagement by recognizing institutions that achieve meaningful, measureable outcomes in the communities they serve.  Mid-Atlantic Christian University has received this award from the Office of the President of the United States for several years.

Five students named to Who’s Who among Students in American Universities and Colleges. The Who’s Who organization award goes to students whose academic standing, participation in extracurricular activities, and community service are decidedly above average. The class of 2013 students receiving the award were Amanda Thornton Kight, Joshua Scott Bondy, Eric Landon Allen, Kevin Wade McNeil, and Attah Djogoessah Osebreh.

Questions or comments may be directed to the Office of the President.

Mid-Atlantic Christian University is accredited by the Southern Association of Colleges and Schools Commission on Colleges to award certificates, associate and baccalaureate degrees. Contact the Commission on Colleges at 1866 Southern Lane, Decatur, Georgia 30033-4097, telephone 404-679-4500, or at http://www.sacscoc.org for questions about the accreditation of Mid-Atlantic Christian University.