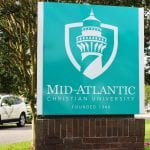 Churches of the Stone-Campbell movement in Eastern North Carolina were so short of ministers in 1948 that most had preaching only one or two Lord’s days each month. It was not unusual for one minister to serve four or even six churches, preaching for each church once per month, whether on the Lord’s Day or on Saturday night. Men in the churches desired to teach and preach but had no formal education in the scriptures. In 1948 Roanoke Bible College was conceived to provide Biblical Higher Education to alleviate this severe shortage of church leaders.

The motto chosen was ―A New Testament School—Set for the Defense of the Gospel (Phil. 1:16 ASV). Leading this effort was George W. BonDurant, employed as an evangelist of the Roanoke District Churches of Christ. Mr. BonDurant and his wife, the former Sarah Presley, had been instrumental in 1937 in organizing Atlanta Christian College in Georgia, where he had served as president and she as a dietician, and both had taught until moving to North Carolina. Mr. BonDurant became the president of Roanoke Bible College (RBC). A Certificate of Incorporation was received on September 10, 1948.

In 1979, Roanoke was accredited by the Accrediting Association of Bible Colleges (now renamed the Association for Biblical Higher Education). President BonDurant retired in April 1986, and William A. Griffin was appointed as the second president. In 1999, Roanoke was accredited by the Southern Association of Colleges and Schools Commission on Colleges (SACSCOC). In 2005 Eastern Christian College (ECC) in Bel Air, Maryland, closed. RBC received some funds, students, trustees, staff, library holdings and equipment from ECC. Mid-Atlantic holds the academic transcripts of ECC students and they are welcomed as alumni of the University.

President Griffin served 20 years as Roanoke’s president, retiring on June 30, 2006. D. Clay Perkins, Ph.D., was selected to become the third president and on July 1, 2006, began his tenure. After two years of deliberation and research, and in consideration of the desired vision and future for the College, the Board of Trustees changed the name to Mid-Atlantic Christian University in March of 2009. In Fall of 2010, the university reorganized its academic structure into two schools: School of Undergraduate Studies and the School of Professional Studies. The University withdrew from the Association for Biblical Higher Education in 2011 in order to focus upon its relationship with the Southern Association of Colleges and Schools Commission on Colleges.

Dr. Perkins concluded his tenure as MACU’s president on June 30, 2017. John Maurice was appointed by the Trustees on February 1, 2018 as the fourth president of Mid-Atlantic Christian University.

Mid-Atlantic Christian University has alumni in 48 states, the District of Columbia, one territory, and 26 countries.