November 29, 2012 – On Tuesday, November 20, VP Academic Affairs Kevin Larsen and Associate Professor of Counseling Don McKinney participated at Elizabeth City State University in a special recognition ceremony that included MACU Army ROTC Cadet Jared Hedges (senior).  Cadet Hedges was part of an elite group of cadets that competed in “Ranger Challenge.” The “Ranger Challenge” competition is a demanding two day individual and team competition with other ROTC teams representing a total of 40 different universities and colleges in the 4th brigade. The goal is to challenge cadets in tough mental and physical situations and scenarios thereby enhancing leader development and building team cohesion. It is good healthy competition among the cadets at the collegiate level. 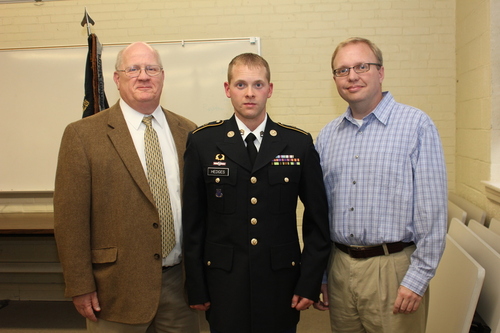 Mid-Atlantic Christian University has cooperated with the Army ROTC Viking Battalion of Elizabeth City State University since 2009 to make ROTC an option for MACU students.  MACU is especially proud of Cadet Hedges for being chosen by his superiors to be a part of the team and represent his unit in the “Ranger Challenge.” According to MSG Van Orden, preparation for the competition begins in August. Cadets are engaged in physical training and classes from 5:15-7:30 a.m. Monday through Thursday, and road marches on Friday. The physical training included running 2 to 6 miles daily. The cadets do a lot of pushups, sit ups, and pull ups, and even do a three-mile run in full uniform and gear with a 35-pound rucksack. The road marches on Fridays were 4 to 8 miles long, done at a 15 minutes-a-mile pace. Road marches were done in full uniform and gear (lowest weight being carried at 35 pounds, high being 50 pounds in the rucksack).

Mid-Atlantic Christian University is accredited by The Commission on Colleges of the Southern Association of Colleges and Schools (COC-SACS) to award certificates, associate, and baccalaureate degrees.