Dr. Bob Smith worked as the Assistant Director and Area E Supervisor in the Abila Archaeological Excavations at Quwayliba, Jordan during June and July. There, he worked with ten student volunteers from various institutions, and fifteen local workers, to uncover more of the Area E Pilgrimage Complex with a view to better understand how it functioned, and to discern the venerated person or memory of a biblical event around which the site developed. This complex provided pilgrims with a rich sensory experience as a stream of water from the city aqueduct ran through it. 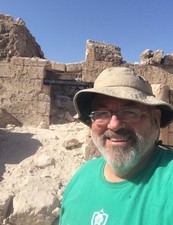 Dr. Smith hopes to find a mosaic inscription in the central room of the ritual structure north of the five-aisled church that will answer questions. In 2018, the team made great progress, as they were able to remove ashlars that had fallen in the AD 749 earthquake, down through a lower reinforced southern doorway that had been collapsing, instead of having to lift them ten feet over the preserved walls. The team reached the floor in the southern third of the ritual building only to discover that it is paved with large pavers and has no inscriptions. 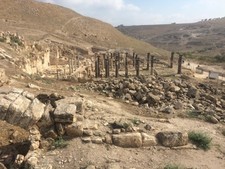 An inscription in early Arabic painted on a plastered wall surface covering a closed off doorway, however, proclaims, “the son of Omar was responsible for completing the work on the doors.”

Dr. Smith is eager to return to the site in 2020 and reveal more of its architecture and flesh out the story of this complex where pilgrims believed that God miraculously addressed their physical and spiritual afflictions.

Dr. Kevin Larsen returned to ancient Shiloh in Israel for a second season of excavation work during May and June. There, he worked with two MACU students (James Ellis and Cody Marks) and a team of other volunteers excavating an archaeological square on the north side of the tel. The area excavated revealed occupational remains from the Roman era and initial indicators of occupation during the seventh and eighth century BC (Iron Age II).

The objectives of the excavation work on the north side of tel-Shiloh include: identifying whether a gate was built into the defensive wall structure of the city on the north side and see if there is evidence for Iron Age II occupation of the site.

Dr. Larsen’s team uncovered a late first century AD jar that has been brought back to the United States for reconstruction by James and Cody. 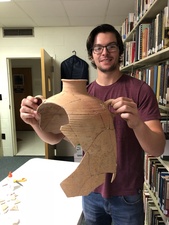 Dr. Larsen intends to return for a third season of work at Shiloh in 2019. 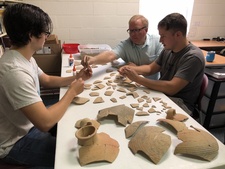