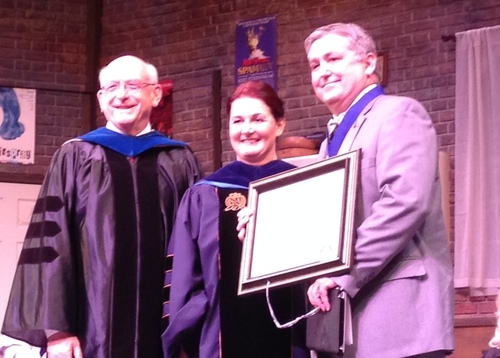 Elizabeth City, NC – May 5, 2014 – Dr. Clay Perkins, President of Mid-Atlantic Christian University and a graduate of Regent University, was honored by Regent on May 2.  The faculty of the School of Business and Leadership (SBL) at Regent named him the SBL Alumnus of the Year. Perkins received the award during the SBL commissioning ceremony and was inducted into SBL’s Alumni Hall of Fame.  Upon receiving the award Perkins stated, “I am surprised and honored to accept this award. I accept on behalf of the great organization I serve. My slogan in life is ‘Serving Those Who Serve.’ At Mid-Atlantic all of our graduates are ministers, some serve in the marketplace and some in the church.”

The SBL Alumnus of the Year award recognizes individuals who have gained “unique distinction through their accomplishments and have brought positive change to the world through Christian leadership,” according to Dr. Doris Gomez, Interim Dean of the School of Business and Leadership.

Dr. Perkins has degrees from Point University, Cincinnati Christian University, and Regent, where he earned a Ph. D. in Organizational Leadership from the School of Global Leadership and Entrepreneurship. His business background includes The Time Gallery, Inc. and Perkins Services Group, Inc. He has taken short term mission trips to New Zealand, Haiti, Mexico, France, Thailand, and India.

As president of Mid-Atlantic, his duties encompass strategic planning, management, fund raising, promotion and oversight of the university. He plays a major role in training extraordinary leaders for Kingdom work. Mid-Atlantic offers 19 degrees in 12 disciplines within 4 departments. The university has recently established the School of Undergraduate Studies and the School of Professional Studies, and now offers four degrees and one certificate fully online.

Dr. Perkins teaches leadership courses at Mid-Atlantic and in the Ph.D. program at Johnson University.   He is a visiting scholar at Capella University.  He currently serves on boards for HASTEN International, a medical missions enterprise, and Financial Planning Ministries. Perkins is involved in the local community as a Rotarian and a Director of the Chamber of Commerce.

He and his wife Sandra worship at Journey Christian Church in Elizabeth City. They have two sons, Daniel and Benjamin, and two granddaughters.

Questions or comments may be directed to the Office of the President.

Mid-Atlantic Christian University is accredited by the Southern Association of Colleges and Schools Commission on Colleges to award certificates, associate and baccalaureate degrees. Contact the Commission on Colleges at 1866 Southern Lane, Decatur, Georgia 30033-4097 or call 404-679-4500 for questions about the accreditation of Mid-Atlantic Christian University.