Elizabeth City, NC – Sept. 25, 2012 – Mid-Atlantic Christian University is honored to be recognized as a Military Friendly School for the third consecutive year. Ken Greene, Ed.D., Vice President for Student Services, stated, “Our goal is to serve our community and educate our students. We appreciate our military and the service that they provide to our community. MACU desires to give back to our servicemen, and we can do this, in part, by meeting their educational and spiritual needs.”

President Clay Perkins added, “God bless those who serve in our military. Mid-Atlantic considers it an honor to be recognized for our support of our military as they pursue their college degrees.”

The 2013 Military Friendly Schools ® list was released recently by Victory Media and can be found at http://www.militaryfriendlyschools.com. This year’s list honors the top 15 percent of colleges, universities and trade schools in the country that are doing the most to embrace America’s military service members, veterans, and spouses as students and ensure their success on campus.

This year’s Military Friendly Schools ® list criteria incorporate a survey of over 3,000 actual student veterans. This feedback provides prospective military students with insight into the student veteran experience at particular institutions based on peer reviews from current students.

Now in its fourth year, the 2013 list of Military Friendly Schools ® was compiled through extensive research and a data-driven survey of more than 12,000 VA-approved schools nationwide. The survey results that comprise the 2013 list were independently tested by Ernst & Young LLP based upon the weightings and methodology established by Victory Media. Each year, schools taking the survey are held to a higher standard than the previous year via improved methodology, criteria and weightings developed with the assistance of an Academic Advisory Board (AAB) consisting of educators from schools across the country.

A full list of board members can be found at http://www.militaryfriendlyschools.com/board.

“A school’s inclusion on the 2013 list of Military Friendly Schools ® shows commitment to providing a supportive environment for military students,” said Sean Collins, Vice President at Victory Media and Director for G.I. Jobs. “As interest in education grows, we’re thrilled to provide the military community with transparent, world-class resources to assist in their search for schools.” Complete survey methodology is available at http://www.militaryfriendlyschools.com/method.

Mid-Atlantic Christian University is accredited by The Commission on Colleges of the Southern Association of Colleges and Schools (COC-SACS) to award certificates, associate, and baccalaureate degrees. 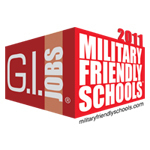 Mid-Atlantic Christian University, a private, faith based, four year college is committed to equality of educational opportunity and will not discriminate against applicants, students, or employees on the basis of race, color, national or ethnic origin, gender, age, disability, or prior military service. Federal guidelines (Sections 702-703 of Title VII of the 1964 Civil Rights Act) clearly recognize the right of church related institutions to seek personnel who will support the goals of the institution. Being a student or employee at Mid-Atlantic Christian University requires a commitment and lifestyle consistent with the institution's mission and values.