Hebrew Summer Session in the News

Two teachers chattered enthusiastically to each other in ancient Hebrew about a tree growing, which they demonstrated by setting increasingly large twigs in buckets in the center of their classroom.

Students aptly responded to the teachers’ questions in the language some had only begun to learn two weeks ago.

These 13 students representing five countries are learning ancient Hebrew through a communicative method in a beginning, four-week course the Biblical Language Center of Jerusalem, Israel, is running at Mid-Atlantic Christian University.

Jordan Jones of Spartanburg, S.C., said last Monday that she had never even looked at the Hebrew alphabet before starting the class, but after just two weeks, she can already read and speak ancient Hebrew.

“They make it interesting; the teachers are very active (and) very expressive,” Jones said. In using “total physical response,” students are not only hearing the language but making real-life connections, and “you retain a lot more.”

BLC Founder Randall Buth said these are the first beginner communicative classes on the ancient Biblical languages offered in the United States. Since 1996, they have only been offered at the BLC in Israel, and that is where they will take place next year again.

“What we’re doing here is unique, has an efficiency and does things,” said U.S.-born Buth, who lived in Africa for 20 years and has lived in Israel nearly 20.

“We wanted to come up with a system to take people and put them inside the language,” he said.

Buth, accompanied by his wife Margret Buth, and Lee Fields, chair of MACU’s Department of Biblical Studies, are co-teaching the beginning ancient Greek course in a room downstairs from the Hebrew class.

Daniel Lam of Hong Kong said he enrolled in the ancient Hebrew class “so eventually I can teach fellow Chinese to learn Hebrew.”

The current method of teaching ancient Hebrew or Greek is “very ineffective” because students must first learn English grammar. That puts up an extra barrier, Lam said. “This method is more direct,” he noted. “To me, it makes more sense.”

One student, who is from the Midwest but has been in China for three years, agreed. He said this “living language method” is now replacing the old grammar translation way of teaching in Asia.

“This approach is especially good for teaching multiculturally,” the student said. “They don’t want to have to learn English to learn Hebrew or Greek.”

Continuing on, the student said that he had studied Hebrew for a few years in seminary, but last weekend, thanks to this class, he had begun to see objects and think of them in Hebrew.

Jaco and Liza Lemmer, a couple from South Africa, were also pleased with the course.

Jaco Lemmer is studying to become a pastor, and Liza Lemmer teaches at a university in South Africa using the grammar translation method.

She hopes to be able to pick up the method from this course to “teach people Hebrew that will really benefit them.”

Emily Wolf of Ohio and Hannah Edwards of Tennessee both aspire to be Bible translators with All-Nations Bible Translation--a young organization that is the first entirely Anabaptist group working on translation. Both young ladies are Mennonites, which is one group within the Anabaptist denomination of Christianity.

Edwards has learned “a vast amount in two weeks”--much more than she learned from two years of weekly French class, she said.

Wolf agreed, noting that she hadn’t studied ancient Hebrew before, but the class “really helps to get the language inside you,” so students understand when they read it or hear it.

Other students include Andy Huber, a native of Switzerland who has worked with Wycliffe Bible Translators in Tanzania for the past 6.5 years, and Noel and Kelley Lazo, a couple from Texas who hope to work with the same organization, but in Mexico with indigenous groups who don’t have the Old Testament in their native tongues.

“Bibles in the language of their heart” have more meaning, Noel Lazo explained. “(The Bible is) the greatest treasure we have, and we want people to know God through His Word.”

Scott McQuinn, one of the Hebrew teachers who holds a teacher assistant position at Fresno Pacific University, said he found this teaching method “more life-giving.”

Instead of having to dissect every word, “I felt like I could open my Bible with more ease,” he said. “I wanted to help other people do that.”

McQuinn said it takes creativity to essentially “trick students into learning the language” while they are having fun.

Ben Kantor, a teacher assistant at the University of Texas at Austin and the other ancient Hebrew teacher for this course, said it’s fun to speak in an ancient language, and teaching builds his own fluency.

The Greek forms of the words have changed enough, that ancient Greek is even “an extra step farther away” from modern Greek, Randall Buth said. 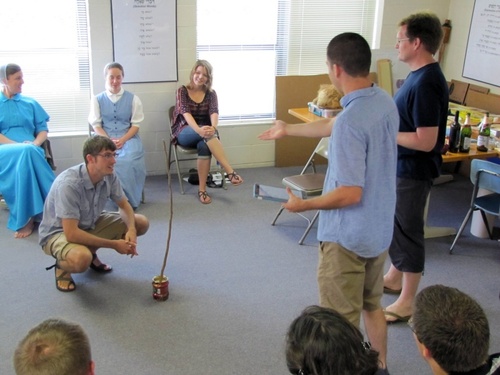