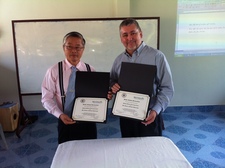 As part of Mid-Atlantic Christian University’s vision 2020, sister school agreements have already been concluded with two schools, both in Asia.

Each agreement is tailored to the needs of the institutions involved, but there are elements in common. For example, MACU professors are urged to become visiting professors at our sister schools, and we urge faculty at sister schools to teach or study at MACU. We encourage an exchange of students, urging our students to do internships at sister school campuses, and seeking students from those schools as our students. In addition, we expect an exchange of literature, with surplus library books at MACU becoming available for sister schools libraries, and translation of materials available at one institution to be made available to the other institution where appropriate.